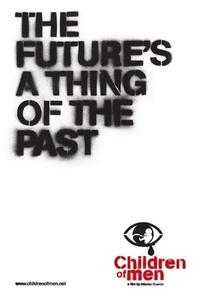 
CHILDREN OF MEN is not a popcorn movie. With its almost relentlessly bleak perspective of the future, Alfonso Cuarón's film doesn't make for pleasant viewing. But it's an exhilarating experience because the picture is an incredible dystopian drama that lacks all of the typical trappings of the genre. Set uncomfortably close to the present, it paints a frighteningly realistic picture of the future. In 2027, every woman on earth is infertile. With the loss of their ability to have children, the world has also lost hope. Clive Owen (CLOSER) plays Theo, a Briton attempting to make a life in this hellish world. His estranged wife (Julianne Moore) convinces him to help transport a young woman to safety. When Theo learns that the woman is pregnant, their journey takes on a significance--and a danger--he never imagined. This is Cuarón's best film to date, a strong statement considering his wonderful HARRY POTTER AND THE PRISONER OF AZKABAN and Y TU MAMA TAMBIÉN. Filmed using a handheld camera, the action draws the audience close, making the horror that much more real. In addition to its remarkable car chase scenes, the film features impressive acting. With his expressive face and voice, Owen gives a nuanced performance that ranks with the best of his career. As a reclusive hippie, Michael Caine shares a charming, counterculture view of the crumbling world. Chiwetel Ejiofor (DIRTY PRETTY THINGS) brings gravity to the role of a terrorist that others might have overlooked. Just when the film threatens to overwhelm with its sense of dread, small moments of comedy show through with Owen's wry sense of humor and Caine's perfect delivery. When the credits roll, CHILDREN OF MEN leaves the audience feeling shell-shocked, not only because of its brutal prophecy, but also because it's such a brilliant film.