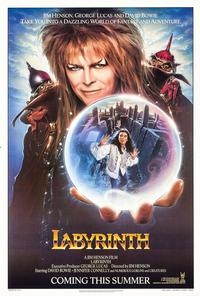 
George Lucas produced and Jim Henson directed this gothic fantasy which pits living and breathing actors Jennifer Connelly and David Bowie (who, along with Trevor Jones, provides the film's music) against a motley collection of Muppet monsters. The film centers upon teenage Sarah (Connelly), who lives in a fantasy world of myth and magic, evil spells, and wondrous enchantment. She is baby-sitting her little brother when she cavalierly wishes that goblins would take him away. She gets her wish, and a coterie of goblins abduct him. She then encounters Jareth (David Bowie), the ruler of a mystical world one step removed from reality. He tells Sarah that the only way to get her brother back is to find her way through a M.C. Escher-like labyrinth and find the castle at the center. As she makes her way through the maze, she faces a number of horrific challenges (like the Bog of Eternal Stench) before she finds her way to the gravity-defying castle, where her brother is being held by the evil goblins.