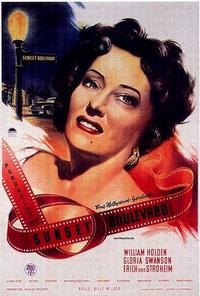 
Attempting to elude creditors, down-on-his-luck Hollywood scriptwriter Joe Gillis (William Holden) pulls into the driveway of the ramshackle mansion of Norma Desmond (Gloria Swanson) on a stretch of Sunset Boulevard. Norma is a former matinee star from the silent film era and is now a recluse at the house where she lives with Max (Erich Von Stroheim) her all-around attendant. At first mistaking Joe for an undertaker who has been called to tend to her dead pet monkey, Norma ostensibly hires him to write a screenplay from a stack of handwritten pages she has scratched out for a film of Salomé which she has written in order to create a vehicle for her return to the screen. Joe takes on the assignment because he needs the money to pay his creditors, but when Max moves all of Joe's possessions into the house on Sunset Boulevard Joe begins to feel trapped. Needing to finish the script but needing friendship Joes leaves one night to visit his friend Artie Green (Jack Webb) where he accidentally bumps into studio reader Betty Schaefer (Nancy Olson) who had earlier shot down Joe's script to a producer nixing his chance at a movie deal. Betty and Joe are attracted to each other immediately but Joe runs back to Norma due in part to his conflicted emotional state driven by his opportunism and his warped sense of loyalty to the older actress. Betty has ulterior motives as she has a script story of her own she thinks she can produce and wants Joe to collaborate so she convinces the writer to meet with her evenings to hammer out their material together. The evenings produce what appears to be a salable treatment and additionally the two fall in love, but Norma has discovered their nightly trysts and tries to sabotage their happiness. The act serves to galvanize Joe into a making a decision to become his own man but not without grave consequences.